As an American living abroad (again), it continually strikes me that one of the essences of living within this world, and being cosmopolitan in that particular sense that means you don’t run from others or hate them, is that you deal with multilingualism on a daily basis. You might not be multilingual, but you deal with it. You live with it. You do not simply have a “coexist” bumper sticker, but you really do exist in tandem with otherness on a daily basis. Again, as an American who was brought up simultaneously hearing about how multiculturalism is good, but living in one of the whitest cities around (Portland, OR [1]), such linguistic mixture, which seems to be at the heart of living with and between multiple cultures, is both a good and necessary thing. Why is it, then, that this mixture is the first thing to go with adaptation into American contexts? Suddenly, everybody speaks English (albeit with some sort of disparaging accent) and all of the signage is in English. This happens in American remakes of both movies and games, and doesn’t even begin to touch on the oddity of people mysteriously speaking English in books. This mixture might not the be all and end all of existence in the world, but it is certainly important in certain places. And yes, Japan is one of those places.

Japan is a strange place. Not in the “Oh, Japan” sort of dismissal, but in the, wow, almost every sign around is in both English and Japanese, yet the majority of people cannot for the life of them respond to a simple question in English despite national training at (minimum) the middle school level, sort of way. Why is this? Granted, I can’t say that my French would allow me to respond despite 1-11 “training” that I’ve forgotten abysmally, buy then again, I don’t live in Quebec. At various points in Japan’s history English has almost become a national language, and as stated above, the Ministry of Education (MEXT) has made English a mandatory subject in middle school (and recently this has expanded down to 5th graders despite teachers’ inability to properly speak/teach the language) [2]. There is a LOT of English here. As long as they don’t really speak to anybody, most foreigners can get around without any trouble (as long as they speak English, and not, say, Polish). However, I need to iterate that it’s not simply that signs are translated. That’s happened (often with expectedly poor results that end up on webpages thanks to botched machine translations [3]), but such simple sign translation is not the point. The point is actually that signs are mixed. Many businesses and buildings are only in roman characters that often are arranged to make English words. I’m sitting in the basement of OICITY in Ueno. Technically, OICITY is pronounced ‘maruishiti’ [ãƒžãƒ«ã‚¤ã‚·ãƒ†ã‚£] in the crib underneath the sign in front of me, but EPOS CARD and GAP, both in the nearby visual space, are not given similar translations. The only sign that is only Japanese in front of my is ç„¡åœ°è‰¯å“ (which, as an aside, is simply localized in the U.S. as MUJI â€” the brandless company itself becomes a brand). However, the truly common one is not these that politely keep the English and Japanese separate, but ATMã‚³ãƒ¼ãƒŠãƒ¼, (ATM Kounaa, which is the loanword for corner) the sign right below the one for the EPOS CARDs. Here we see the mixture that is present and implied with all of the signage. It’s like a bilingually trained child was never told they were actually speaking two different languages when they were grew up code-switching and as an adult they now expect everybody to follow both of their languages. 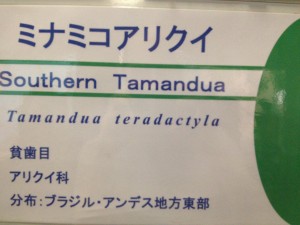 This is everywhere. I just came from the Ueno Zoo, and all standardized signs were written with katakana (despite the animal’s nativity) with English underneath, then the Latin name, and finally in the standard usage with both kanji and hiragana to describe the animal’s eating habits and place of origin. And any argument that katakana might be easier to read for children does not hold, as the nearby signs saying not to feed the animals (arguably what children must read and understand) is written in hiragana, not katakana. 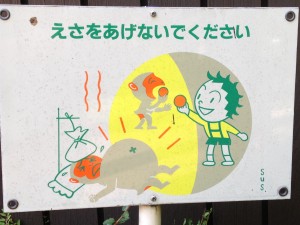 The animal, as an essentially alterier creature, is unknowable/not human, and it is marked as such through katakana. Just like you can never get in the cages, the animals can only be known from afar. Similarly, foreignness is held at bay linguistically through a simultaneous embrace and rejection through the constant utilization, but never full incorporation. Such mixture is a major part of Japan. Not the the most important part, but definitely an important element. So, why then if translation is supposed to bring understanding, does translation never deal with this? And, no, I’m not arguing that Japan is loveydovey, and translations must represent this. Rather, I’m arguing that it is the ethical responsibility of translations not simply to be enjoyable, but to bring understanding of what it is like to consume that text in its place of origin. A text does not travel as some unmarked pleasure, ready for easy consumption, but loaded down with context, necessarily.

Take Murakami Haruki’s (relatively) recent 1Q84. Even the title has wordplay where the pronunciation of 9 and Q is the same, but it goes further than that. Murakami, like many postmodern Japanese writers (including Yoshimoto Banana) deliberately flirts with the West both textually and thematically with resultant negative reviews from the more traditional Japanese literary circle. It is this flirtation, often in the form of mixture, that makes Japanese multilingualism (seen everywhere, including in postmodern Japanese writing)â€¦ not unique, but at least interesting. But why does none of this flirtation, this mixture, come across? Obviously, the simple answer is that adaptation to local tastes sells well, but that is neither helpful, nor when you get down to it, a good translation. Adaptation to local tastes is simply translation that sells well.

And the merry-go-round comes back again and I’m on ethics.