I seem to be scouring the cheap games that I can find, looking for interesting things having to do with localization. I found one in Cogs. 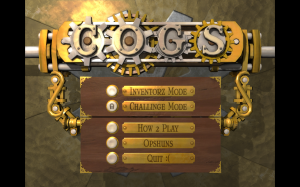 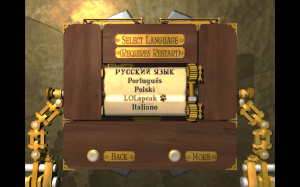 Cogs has the standard language options, but then includes LOLSpeak. A joke? Caturday funz? A hint at available, but (generally) unattempted possibilities?

Wikis (from the Hawaian word for “fast”) are a form of distributed authorship. They exist due to the effort of their user base that adds and subtracts small sections to individual pages. One user might create a page and add a sentence, another might write three more paragraphs, a third may edit all of the above and subtract one of the paragraphs, and so on. No single author exists, but the belief is that the “truth” will come out of the distributed authority of the wiki.  It’s a very democratic form of knowledge production and authorship that certainly has issues, but for translation it enables new possibilities. While wikis are generally produced in a certain language and rarely translated (as the translation would not be able to keep track of the track changes), the chunk-by-chunk form of translation has been used in various places.

The Lolcat Bibul translation project is a web-based effort to translate the King James Bible into the meme language used to caption lolcats (amusing cat images). The “language” meme itself is a form of pidgin English where present tense and misspellings are highlighted for humorous effect. Examples are “I made you a cookie… but I eated it,” “I’z on da tbl tastn ur flarz,” and “I can haz cheeseburger?”[1] The Lolcat Bibul project facilitates the translation from King James verse to lolcat meme. For example, Genesis 1:1 is translated as follows:

KING JAMES: In the beginning God created the heaven and the earth
LOLCAT: Oh hai. In teh beginnin Ceiling Cat Maded teh skiez An da Urfs, but he did not eated dem. [2]

While the effort to render the Bible is either amusing or appalling depending on your personal outlook, important is the translation method itself. The King James Bible exists on one section of the website, and in the beginning the lolcat side was blank. Slowly, individual users took individual sections and verses and translated them according to their interpretation of lolspeak, thereby filling the lolcat side. These translated sections could also be changed and adapted as users altered words and ideas. No single user could control the translation, and any individual act could be opposed by another translation. The belief is that if 72 translators and the hand of God can produce an authoritative Bible, surely 72 thousand translators and the paw of Ceiling Cat can produce an authoritative Bibul.

FLOSS (Free Libre Open Source Software) Manuals and translations are a slightly more organized version of this distributed trend [3]. FLOSS is theoretically linked to Yochai Benkler’s “peer production” where people do things for different reasons (pride, cultural interaction, economic advancement, etc), and both the manuals and translations capitalize on this distribution of personal drives. Manuals are created for free and open source software through both intensive drives where multiple people congregate in a single place and hammer out the particulars of the manual, and follow-up wiki based adaptations. The translations of these manuals are then enacted as a secondary practice in a similar manner. Key to this open translation process are the distribution of work and translation memory tools (available databases of used terms and words) that enable such distribution, but also important is the initial belief that machine translations are currently unusable, which causes the necessity of such open translations.

Finally, Facebook turned translation into a game by creating an applet that allowed users to voluntarily translate individual strings of linguistic code that they used on a daily basis in English. Any particular phrase such as “[user] has accepted your friend request” or “Are you sure you want to delete [object]?” were translated dozens to hundreds of times and the most recurring variations were implemented in the translated version. The translation was then subject to further adaptation and modification as “native” users joined the fray as Facebook officially expanded into alternate languages. Thus, <LIKE> would have become <好き>, but was transformed to <いいね！> (good!). Not only did this process produce “real” languages, such as Japanese, but it also enabled user defined “languages” such as English (Pirate) with plenty of “arrrs” and “mateys.”

Wikis, FLOSS, and Facebook are translations with differing levels of user authority, but they all work on the premise that multiple translators can produce a singular, functioning translation. In the case of Facebook this functionality and user empowerment is highlighted; for FLOSS, user empowerment through translation and publishing are one focus, but a second focus is the movement away from machine translation; in all cases, but wikis particularly, the core belief is that truth will emerge out of the cacophony of multiple voices, and this is the key tenet of the destabilization of the translator [4].

The other trend is the destabilization of the translation. This form of translation has roots in the post divine Septuagint where all translation is necessarily flawed or partial. Instead of the truth emerging from the average of the sum of voices, truth is the build up: it is footnotes, marginal writing and multiple layers. Truth here is the cacophony itself. The ultimate text is forever displaced, but the mass intends to eventually lead to the whole (whether it gets there or not is separate matter for Benjamin, Derrida and the like).
While this style of translation is less enacted at present it is not completely new. Side by side pages with notes about choices is one variation centuries old (Tyndale’s Biblical notations, Midrash, and side by side poetry translations), the DVD language menu coming from multiple subtitle tracks is another variation, and finally this leads to new possibilities for multi-language software translations.

While the Septuagint leads to the creation of a single text in the myth, 72 translators translating a single text would produce 72 different translations in reality. The attempt to stabilize this inherent failure of translation argues that one of those translations is better and used, but it can be altered if a better translation comes around. The Bible translation is always singular, but it changes. Similarly, the Odyssey is translated quite often, but the translations are always presented alone. They are authoritative. In contrast, Roland Barthes comparison of modern works and postmodern texts and Foucault’s discussion of the authorial function both lead toward this destabilization of the author [5]. This discussion can be linked into translation studies’ discussions of author and translator intellectual production. The destabilization of translators and translations build off of both of these postmodern traditions, but the latter trend attempts to avoid weighing in on the issue by simultaneously exhibiting the conflicting iterations.

The main difficulty of the destabilization of the translation is the problem of exhibiting multiple iterations at one time in a meaningful way. How can a reader read two things at once, or with film, how can a viewer understand two soundtracks at once? Books and films provide multiple examples of how to deal with such an attention issue. With literary works endnotes are a minimal example of such attention divergence. Endnotes do not immediately compete for the reader’s attention, but the note markers indicate the possibility of voluntary switching. Footnotes are a slightly more aggressive form of attention management s they tell the reader to switch focus to the bottom of the page, a smaller distance that is more likely to happen.

For film, subtitles, which layer the filmic text with both original dialogue and the authorial translation, are a close equivalent to endnotes as they split the viewer’s attention, but do not force the attention toward a particular place. It is entirely possible to ignore subtitles regardless of complaints against them (much harder to ignore would be intertitles filling the screen). Finally, the benshi, a simultaneous live translator/explainer, is an early to mid 20th century Japanese movie theater tradition that most resembles the more aggressive footnotes as the benshi’s explanative voice competes with the film’s soundtrack for the audience’s aural attention [6].

Unlike websites such as Amazon, which have language dedicated pages (.com, .co.jp, .co.de) and block orders from addresses outside of their national coverage, or services such as the Sony PSPGo Store, which disallows the purchase of alternate region software, some sites utilize pull down language options that change the language while remaining on the same page, or provide multiple linguistic versions for purchase.

With digital games the localization process has traditionally replaced one language with its library of accompanying files with another. However, as computer memory increases the choice of one language or another becomes less of an issue and multiple languages are provided with the core software. This gives rise to the language option where the game can be flipped from one language to another through an option menu. Most games put this choice in the options menu at the title screen, but a few allow the user to switch back and forth. The simultaneous visibility of multiple languages or a language switch button would be further advancements toward the destabilization of translations.

[5] Barthes, Roland. “From Work to Text.” In The Cultural Studies Reader, edited by Simon During, Donna Jeanne Haraway and Teresa De Lauretis. London: Routledge, 2007; Foucault, Michel. “What Is an Author?” In The Essential Foucault: Selections from Essential Works of Foucault, 1954-1984, edited by Paul Rabinow and Nikolas S. Rose. New York: New Press, 2003.